Tombstone came to RRCA in the fall of 2017.  She is 9 years old and was donated to our facility by a falconer. 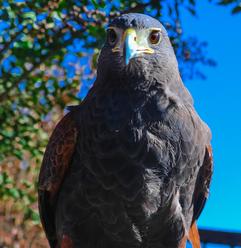 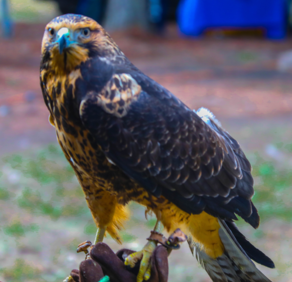 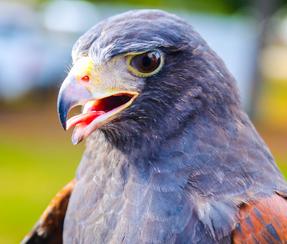 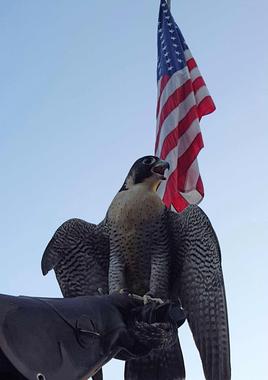 Harris's hawks (Parabuteo Unicinctus) are native to the extreme southern US info Central and South America.  Harris's hawks are unique because they hunt cooperatively in packs consisting of 5 or 6 other Harris's.  They have tall legs so one bird can land on cactus without getting poked, then another bird will land on that bird's shoulders, and they will stack on top of each other to give the top bird the advantage of spotting prey at greater distances.  The top bird sees the prey, flies after it followed by the other birds and they will share the kill as a group.  They feed on small mammals, rodents, and sometimes other birds.  RRCA currently has 3 Harris's hawks as education birds. 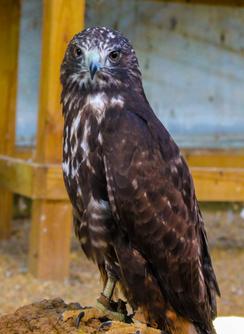 Phoenix came to RRCA in 2008 from east Tennessee.  She was a captive bred retired falconry/breeding hawk.  When she was 3 years old, she had a toe on her right foot amputated from an injury and then was used as a breeder for 8 years.  She was donated to RRCA at that time and is now 21 years old. 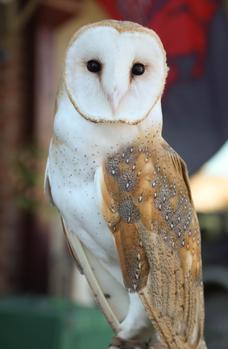 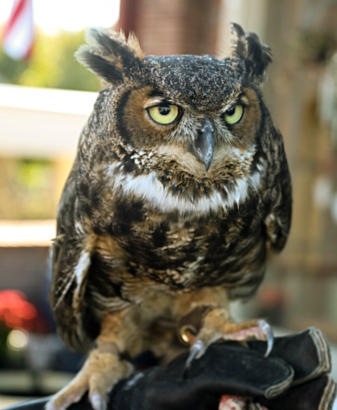 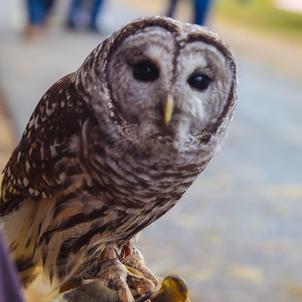 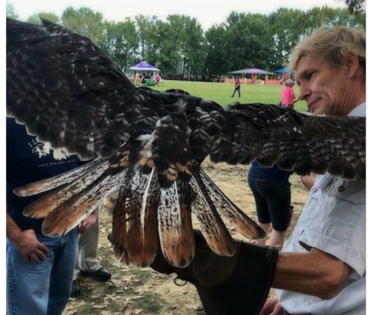 Raptor Rehab of Central Arkansas and our Education Ambassadors provide outreach programs to the public. Our goal is to educate the public about birds of prey, their role in our environment, and laws concerning migratory birds.

Our programs can be tailored to meet your needs. Contact us to schedule a presentation! 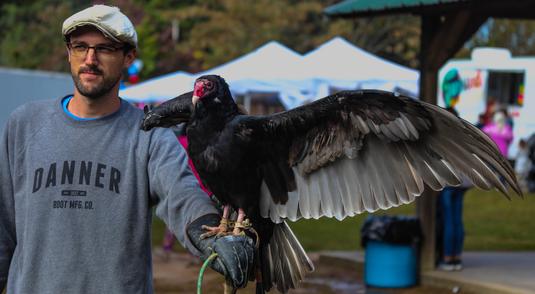 Arthur the turkey vulture came to RRCA as an adult the summer of 2015.  Arthur's right wing was broken and healed incorrectly in the wild, but he enjoys showing off his good one to a crowd.

Turkey vultures (Cathartes Aura) are scavengers and feed on carrion.  It finds it's food using it's keen eyesight and sense of smell.  Turkey vultures spend the summer in the middle part of North America and the winter months from middle North America to South America.  Having come to us as an adult, we do not know Arthur's age, but he can live up to 20 years in captivity.

Bogart the Great Horned Owl came to RRCA in early 2010 after being found as a nestling on the ground.  She hatched out blind and was assumed to be pushed from the nest as birds of prey will often push young out of the nest with birth defects.  Although Bogart developed her sight, she already imprinted on humans so can't be released into the wild.  She is our most talkative bird, always chatting up the audience at shows.

Great horned owls (Bubo Virginianus) can be found throughout North America and parts of South America.  It's diet consists of mammals, birds, reptiles and amphibians.  The great horned owl "owns" the night time sky, as it has no other natural predators other than another great horned owl.  It is possible for Bogart to live 30+ years in captivity.

Price the Swainson's hawk came to RRCA December of 2017 from Price, Utah.  A raptor rehabilitation there ended up with Price due to a broken left wing that healed incorrectly in the wild so she could not be released.  It is estimated that she was hatched in the spring of 2016.

​Swainson's hawks (Buteo Swainsoni) are found in wester North America mainly in the spring and migrate to South America in the winter with some traveling as far as 14,000 miles.  Their diet consists of mammals and insects such as grasshoppers and dragonflies, often eating them "on the wing".  In captivity, Price can live 25 years.

Arizona came to RRCA in 2009 and is a 19 year old falconry bird from south Arkansas.

Hidalgo, the Harlan's Red Tail Hawk came to RRCA in the spring of 2015 with a broken right wing tip, making her non releasable.  Hidalgo was a first year bird when she came to our facility based on the juvenile coloration (no red tail).

Harlan's red tails (Buteo Jamaicensis Harlani) breed in northwestern Canada and Alaska and winter from Nebraska to Kansas, Texas and northern Louisiana.  Their diet consists primarily of regents and small mammals and can live up to 25 years in captivity.

Titus is a barn owl who came to RRCA in the spring of 2017. Titus was found as a nestling near a creek on the ground near Hot Springs, AR and unable to be placed with other rehab barn owls due to her size and frail health.  Had Titus not been hand raised, she undoubtedly would have died.  Due to imprinting on a human, she is unable to be released into the wild, but is perfectly happy to have our volunteers treat her like the queen she knows she is!

The barn owl, (Tyto Alba) is the most widely distributed species of owls and one of the most widespread of all birds.  Rodenticides (rat poison) have had an impact on the population of barn owls.  In captivity, it's possible for Titus to live 20+ years.

​Shaheen the Anatums Peregrine Falcon came to RRCA during the summer of 2013.  Shaken was banded along with two other siblings in Kansas, MO.  Although one sibling was found dead in MO after leaving the nest, Shaheen made it to Searcy, AR before an accident left him with a broken right wing tip so he now proudly represents his species at our shows.

The peregrine (Falco Peregrines) is known as the fastest animal in the world, reaching speeds of over 200 miles per hour in a dive or "stoop"!  Peregrine falcons feed primarily on other birds in the wild.  In captivity, it's possible for Shaheen to live 25 years.  Given the estimation that 60% of peregrine falcons will not survive past one year old in the wild, Shaheen is pretty happy to be an education ambassador.

Doodle is a barred owl that came to RRCA in the fall of 2013 from a rehab facility in upstate New York.  Doodle is a car strike victim, blind in his left eye and partially sighted in his right eye making him non releasable.  Doodle came to us as an adult so we do not know his age.  He is a very "chill" bird happy to let new volunteers practice their handling skills on him.

​The barred owl (Strix Varia) is found primarily in the astern United States into Canada.  Barred owls feed on small mammals but will also eat reptiles and small birds..